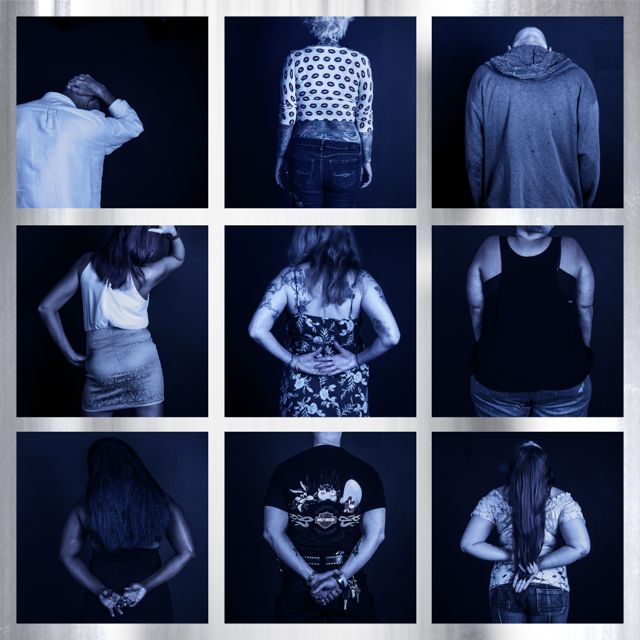 All images copyright of the artist and used with their permission.

This piece is 40″ x 40″ consisting of nine backside portraits printed on metal. Speaking about identity, labels, and racism; it is a visual commentary on the Trevon Martin incident. ‘Suspicious Behavior’ came out of Zuback’s larger Identity series.

When Zuback creates his photographs he is reminded that everyone comes to life experiences differently. He would like the viewer of his work to come away feeling visually satisfied but intellectually curious. He feels most successful when he has connected with the viewer on an emotional level but left room for interpretation.

Zuback’s fine art work is driven by the narrative but enhanced with the technical story telling abilities of the photographic process. A glint of highlight, how he brings out the texture on a certain object or how re-cropping the image in the viewfinder, can turn an average image into an extraordinary one. These are the little victories that fuels his desire as a visual story teller. He finds each of his photographic themes a journey of discovery and learning. Zuback enjoys new paths that challenge his comfort zone. Whether he is pushing those boundaries with the subject matter or the material or technique that he is using, it is always more about the journey and not the final destination.

Inspired by the classic album covers of the 1960′s and 70′s, he has been creating conceptual/staged contemporary photographs for exhibition since the late 1990′s. His narratives generally deal with issues of family and identity, in an often surreal style.

He often considers or describes himself as a fly on the wall. Always in a state of observation, testing the surroundings, and at times participating. His goal as a fine art photographer is to take those observations and life experiences and create visual statements that really become a mirror for the viewer. When people view his photographs, he would like the viewer to come away feeling visually satisfied but intellectually curious.

Zuback’s work can be found in private collections through out the country. He has participated in many Juried group exhibitions and solo shows in Southeastern Wisconsin.